GLIMPSE of the Future – It begins!

So the first meeting of GLIMPSE of the Future collaboration was on Monday 30th June – discussing ideas between artists and futurists with which we can stage future scenarios both good and bad – so that the dialogues discussed will exist well beyond the final curtain. With Science Fiction Theatre, there is something about the liveness of the activity, the embodiment of a world between performers and audience, the reliance on language, gesture and sound to bring these concepts to life – and it’s something I want to emphasize with GLIMPSE.

Why GLIMPSE, you ask? I came up with this acrostic that sums up our collab quite nicely: Gauging Live Investigations into Mindful and Plausible Speculative Events. What’s exciting about this stage in the project particularly is that starting almost from tabula rasa enables us to explore and roam freely into any area we feel like (within reason, of course), but with that there’s always an element of fear and risk. It’s those feelings that can be comparable to thinking of the far future.

In our first meeting, we discussed events in the next 50 years – how certain concepts would be defined, how would we see ourselves as individuals and how would our interactions change? How would our next generations be educated – and how could we continue to become educated and empowered in later life? What would empowerment even mean? What would enhancement entail – and what would be the costs of these? How could we be happy in the future? How will people be self-sufficient? Would we update our concept of normality?

These discussions were just the tip of the iceberg, as is this photograph of one of our brainstorming sessions:

I’m looking forward to our next meeting – thank you everyone for getting involved!

When I visited the Liverpool Archives of Science Fiction (which is co-incidentally, a fascinating resource, and would recommend those with a passion in the subject to visit it when you can), there were so many sources I wanted to look up – especially the Science Fiction Theatre of Liverpool and Ken Campbell’s legacy. I also wanted to read Samuel Delany’s article “Flow My Tears…: Theater and Science Fiction”; in Issue #1, NYSF September 1988 in its entirety – I’ve seen it quoted in Staging the Impossible: The Fantastic Mode in Modern Drama, where the following quotation is used:

…there are no closeups to convey the intricacy and coherence of detail that suggests the greater world outside the frame, the world beyond the proscenium. (p13)

However, it’s not all woe. This following statement from his article really echoes what theatre practitioners are doing (and have done) and that is using the medium to its strengths, rather than emulating film and television. We need production strategies specifically for genre theatre to get the best possible result:

When these problems are solved, the work will strike the knowledgeable as both more than SF and other than theatre – because the whole set of framing exceptional conventions will have to be largely adjusted…only then can a dramaturge really put his or her energy into them, the proper framing devices and imagistic modes in the pursuit of whatever scenic reality, that does not pull the material back into this old, old form. (p15)

Well said, Delany. We need to hold dialogues (which has been going on, but not nearly where it needs to be) on how this can be done, has been done, and will be done.

I had the fortune to find transcripts and so on of SF theatre that has gone on before, with examples of how, in my opinion, it should and shouldn’t be done. Stay tuned!

I just wanted to thank again the audience from our rehearsed reading of Terra Firma at the Etcetera earlier this year in February. I’ve just had my annual review for my PhD just moments ago, and the idea of development from the previous performance was fresh in my mind as we move onto the beginning of rehearsals for the fully fledged production.

Your feedback was valued greatly by us (including the fact that the actors should drink scotch to ease their “worries in a post apocalyptic world” – although I’m sure there are allowances for the writer to indulge in it!) and I’m very grateful to have such fine direction from Ryan Watson, especially with the development of the edited scenes (that shouldn’t spoil anything for people who haven’t seen it).

We would definitely welcome back the audience who have seen the rehearsed reading as of course new audience members. The script has been drafted again since then, so we hope you enjoy the show! We have a few tricks up our sleeve that we’ll be deploying, so don’t miss out!

Looking forward to seeing you there,

If you didn’t already know, the Camden Fringe has released their lineup to the eager public, also unveiling their beautiful Shakespearian pigeon, both fowl and fair! 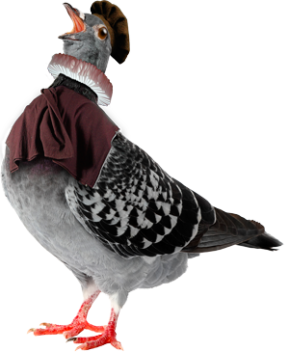 We’re delighted to see Terra Firma in the listings – it feels all the more real! We’re on the tail (feather) end of casting, so the real fun begins when the rehearsals start! I’ll be blogging the RnD process throughout as well as other snippets we find along the way.

Our link for tickets can be found here: http://www.camdenfringe.com/detailact.php?acts_id=445

Do check out the shows – the Fringe starts on the 28th July – 24th August so they’ll be plenty to whet your appetite!

Many thanks to the Camden Fringe for welcoming us to this great festival!

So what do we have in the works at the moment?

There are so many avenues for collaboration and new writing – we’re chomping at the bit to get started and have the work rolling out on the conveyor belt here at Stars or Mars! However, reality kicks in and we have to plan accordingly. Here are some little tidbits for you in the mean time (think of it as a theatrical amuse-bouche) to whet your appetite with.

Here are some hints as to what we’re planning:

– A showcase of short SF plays (the first night is already being planned as we speak!)

– A collaboration between Futurists and Writers

– A night of SF themed monologues

You know what they say…

If you want to register your interest and how you’d like to get involved, email us at starsormarstheatre@gmail.com.

We’re delighted to announce that Stars or Mars will be at the Camden Fringe in August with Terra Firma!

We did a staged reading of  the play at the Etcetera Theatre in February – and we received good feedback and great food for thought on what to change, what to chop and what to develop. We’re coming back stronger and (hopefully) better than ever!

To see our past site, check out http://www.terrafirmaplay.co.uk